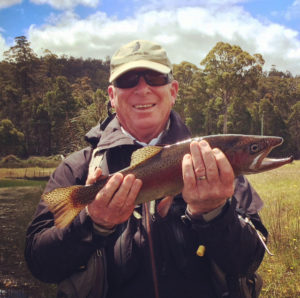 History of Trout in Tasmania

IN APRIL 1864, THE Norfolk sailed from England and docked at the Railway Pier in Melbourne, carrying an unsuspected cargo: 2700 live brown trout ova packed inside 30 tonnes of ice. Two previous attempts to transport live fish eggs had failed. Aboard was Sir James Arndell Youl – a pastoralist whose vision to bring trout to Australia would shape the country’s fishing industry for generations to come.

Then, on 4 May, the first of the brown trout eggs hatched in the Plenty River in Tasmania. These baby trout became the primary stock for the waters of Australia and New Zealand.

“The brown trout is considered by fishers to be the aristocrat in freshwater fishing and is the most sought after in many countries throughout the world,” says Terry George, President of the Australian Trout Foundation.

Rainbow trout was the second of the trout species to arrive in Australia, originating from the rivers and lakes of North America and brought to New South Wales from New Zealand in 1894.

Tasmania as a fishery

Residents and visitors to Tasmania are blessed to be surrounded by many fantastic fisheries.  Our coastal regions offer great rock fishing, surf fishing as well as productive sheltered water fishing, and offshore fishing for large game species. Providing great Fishing opportunities in Tasmania.

Of particular interest to us at the Tasmania Fly Fishing, is the inland fishery, especially the Brown Trout, given our selection of rivers, lakes, lagoons, and tarns. Our inland waters provide many exciting fishing options that are a pleasure to fish, albeit challenging at times. And let’s face it, would we want it any other way?

Tasmania is a truly unique and beautiful trout fishery that really lends itself to the dry fly trout fishing enthusiast. We have many streams, creeks, and river systems that offer clear water fishing in attractive native locations, that happen to hold ample numbers of wild trout.

Our beautiful island state of Tasmania was the first place in the Southern Hemisphere to successfully introduce trout. Rainbow Trout, Brown Trout, Brook Trout, and Atlantic Salmon have all been introduced to our fishery over that time, however, it is the Brown Trout that has thrived, given the suitable conditions and environment for this species.

And while salt water fly fishing isn’t practiced by many anglers in Tasmania, exciting opportunities still exist for those keen enough to put in the time and effort.

High on our list of favorite rivers are the: St Patrick River, South Esk River, North Esk River, and the Meander River, including many of their feeder streams and creeks. These waters can provide amazing twig water fishing, especially at hopper time.

In any of these locations, there can be prolific rises to red and black spinners, highland duns, caddis flies, damsel flies, gum beetles, and dragon flies while some of our mudeye (dragon fly larvae) migrations, jasid falls and hopper seasons can last in one’s memory for a lifetime.

Outside the (tackle) box

Even though your Tasmania Fly Fishing has a well-established group of favorite rivers and lakes, we are prepared to fish “outside of the box” and try new things. Being a dedicated service and having a focus on providing fun, enjoyable and memorable experiences for you, our valued client, we always put time into researching the areas we are going to visit, doing as many reconnaissance missions necessary to any area, as much is needed, to provide a tour that encourages return visits and friendly referrals.

Contact us now to customise a fishing tour especially for you!

Tasmania is a fascinating location and well worth exploring, Below is a variety of information to help you gain understanding about out beautiful home, Tasmania

Information below from Wikipedia:

Tasmania (abbreviated as TAS and known colloquially as Tassie) is an island state of Australia. It is located 240 km (150 mi) to the south of the Australian mainland, separated by Bass Strait. The state encompasses the main island of Tasmania, the 26th-largest island in the world, and the surrounding 334 islands. The state has a population of around 526,700 as of March 2018. Just over forty percent of the population resides in the Greater Hobart precinct, which forms the metropolitan area of the state capital and largest city, Hobart.

Tasmania’s area is 68,401 km2 (26,410 sq mi), of which the main island covers 64,519 km2 (24,911 sq mi). It is promoted as a natural state, and protected areas of Tasmania cover about 42% of its land area, which includes national parks and World Heritage Sites. Tasmania was the founding place of the first environmental political party in the world.

The island is believed to have been occupied by indigenous peoples for 30,000 years before British colonization. It is thought Aboriginal Tasmanian’s were separated from the mainland Aboriginal groups about 10,000 years ago when the sea rose to form Bass Strait. The Aboriginal population is estimated to have been between 3,000 and 7,000 at the time of colonization, but was almost wiped out within 30 years by a combination of violent guerrilla conflict with settlers known as the “Black War”, inter-tribal conflict, and from the late 1820’s, the spread of infectious diseases to which they had no immunity. The conflict, which peaked between 1825 and 1831, and led to more than three years of martial law, cost the lives of almost 1,100 Aboriginals and settlers.

The island was permanently settled by Europeans in 1803 as a penal settlement of the British Empire to prevent claims to the land by the First French Empire during the Napoleonic Wars. The island was initially part of the Colony of New South Wales but became a separate, self-governing colony under the name Van Diemen’s Land (named after Anthony van Diemen) in 1825. Approximately 75,000 convicts were sent to Van Diemen’s Land before transportation ceased in 1853. In 1854 the present Constitution of Tasmania was passed, and the following year the colony received permission to change its name to Tasmania. In 1901 it became a state through the process of the Federation of Australia.

Some information is from Wikipedia:

Fishing is the practice of catching fish. It is a prehistoric practice dating back at least 40,000 years. Since the 16th century, fishing vessels have been able to cross oceans in pursuit of fish, and since the 19th century it has been possible to use larger vessels and in some cases process the fish on board. Fish are normally caught in the wild. Techniques for catching fish include hand gathering, spearing, netting, angling, trapping and Fly Fishing.

The term fishing may be applied to catching other aquatic animals such as shellfish, cephalopods, crustaceans and echinoderms. The term is not usually applied to catching aquatic mammals, such as whales, where the term whaling is more appropriate, or to farmed fish. In addition to providing food, modern fishing is also a recreational sport.

According to FAO statistics, the total number of fishermen and fish farmers is estimated to be 38 million. Fisheries and aquaculture provide direct and indirect employment to over 500 million people. In 2005, the worldwide per capita consumption of fish captured from wild fisheries was 14.4 kilograms, with an additional 7.4 kilograms harvested from fish farms.

Many credit the first recorded use of an artificial fly to the Roman Claudius Aelianus near the end of the 2nd century. He described the practice of Macedonian anglers on the Astraeus River:

…they have planned a snare for the fish, and get the better of them by their fisherman’s craft. . . . They fasten red wool. . . round a hook, and fit on to the wool two feathers which grow under a cock’s wattles, and which in color are like wax. Their rod is six feet long, and their line is the same length. Then they throw their snare, and the fish, attracted and maddened by the color, comes straight at it, thinking from the pretty sight to gain a dainty mouthful; when, however, it opens its jaws, it is caught by the hook, and enjoys a bitter repast, a captive.

In his book Fishing from the Earliest Times, however, William Radcliff (1921) gave the credit to Martial (Marcus Valerius Martialis), born some two hundred years before Aelianus, who wrote:

…Who has not seen the scarus rise, decoyed and killed by fraudful flies…

What our clients say

“Scotty is charming, knowledgeable and highly skilled. He knows the Tassie waters as only the trout do...?”

“Scotty was a great help, it was so enjoyable, learning to fly fish in such beautiful locations...”

“Scott is a wealth of knowledge - great day out fishing”

“Fishing in the beautiful Tasmanian wilderness, what could be more perfect - Scott definitely knows the best fishing spots - highly recommend”

“Scott's coaching skills are fantastic. He is patient, positive and encouraging at all times...”